Student at Truham
Head Boy at Truham (Nick and Charlie)

Charles Francis "Charlie" Spring, portrayed by Joe Locke, is one of the two main protagonists in Heartstopper, This Winter, and Nick and Charlie, a supporting character in Solitaire, and has a cameo in Radio Silence. He is the younger brother of Tori Spring, the boyfriend of Nick Nelson, and is best friends with Elle Argent, Aled Last, Isaac Henderson, Tara Jones, Darcy Olsson, Tao Xu, and Sahar Zahid.

Charlie is white and multi-ethnic with his mother being from the United Kingdom while his father being from Spain; as a result, he has a light tan pigment. Charlie has inherited his father's black hair, though he's the only Spring to have naturally curly hair, and has inherited his mother's blue eyes. Charlie gets his hair cut short early on in Heartstopper, though he lets it grow out thick in later volumes. Charlie is conventionally tall, standing at 5'11", and has a lanky, thin build. A notable part of Charlie's appearance is his signature dimples, something that appears whenever he's excited or happy. Charlie's outfits usually consist of white Converse sneakers, ripped skinny jeans, and sweaters or plaid shirts.

In the television series, Charlie's height is shortened to about 5'9", and his face is more well-shaped.

Charlie is high-strung and tends to overthink things. He is sensitive, and has a tendency to apologize a lot, something Nick takes notice of instantly. Charlie has a habit of masking how he feels in order to keep others happy. Charlie is incredibly empathetic, crying when Nick breaks down to him simply because "seeing [Nick] cry makes [him] cry". Most people, including himself, refer to him as a "gay nerd", loving to read[3], dogs, and playing the drums. Charlie also appreciates the arts, loving Ancient Greek classical literature (having The Iliad and Brideshead Revisited posters) and Keith Haring's work. Tori describes him as being nice, a characteristic she believes is underrated and can be taken advantage of.

As a result of bullying, being outed, and the toxic relationship with Ben Hope, Charlie suffers from a plethora of mental illnesses. Although a group of kids older than him had stopped the teasing, the damage had already been done. Charlie mentioned how he used to self harm to deal with the pain, though he had eventually stopped. However, Nick starts to notice how little Charlie eats in public, and gets concerned when Charlie faints from exhaustion while they explore the Louvre Museum. He reveals that his anorexia stems from wanting the need to control something in his life, and it often flares up when he is stressed or upset. Though Nick attempts to adapt to Charlie's dilemma by bringing him in private to eat, his anorexia only gets worse. Nick tries to encourage Charlie to talk to his parents, Charlie has a tense relationship with his mother and causes him to be afraid that she wouldn't believe him. Eventually, Nick helps Charlie tell his parents his problem. But due to Charlie being placed on a waiting list to be seen by a doctor, Charlie eventually relapses into self-harm. Charlie is then taken to a psychiatric hospital for people struggling with anorexia, and is soon taken to see a therapist named Geoffrey. There, he is diagnosed with anxiety, depression, anorexia, and obsessive compulsive disorder. Charlie himself doesn't process all of the trauma he had endured until going to therapy with Geoffrey. Though he eventually gets his anorexia under control, he currently suffers from body dysmorphia, wearing bulky clothes to hide his body and staring at himself in the mirror in disgust. His body dysmorphia also affects his desire to be intimate with Nick, having trouble taking his clothes off and fearing Nick being disgusted by his size and scars. 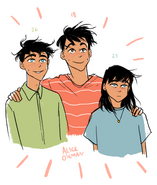 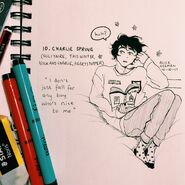